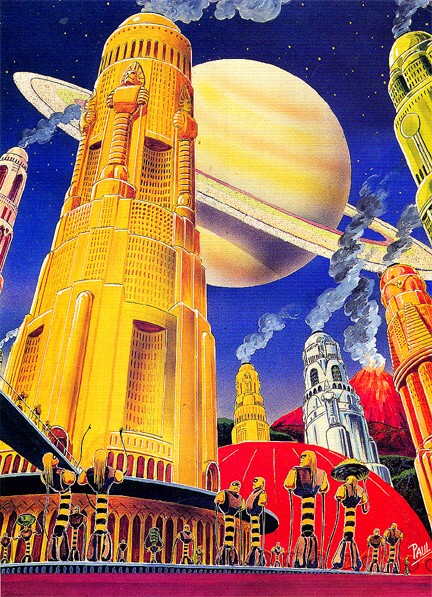 "Once upon a time one magazine artist was granted the freedom to paint pictures from his imagination, not covers needed to sell the stories inside and not with firm suggestions from a paying boss.  The back covers of Amazing Stories and Fantastic Adventures became [Paul's] art gallery. And amazing and fantastic they were. Pure science fiction art at its best: multicolored skies filled with the strange and exciting, towering buildings embedded into cities filled with twisted shapes and inhabited by incredible life forms. And inside the magazine, a bit of print attempted to explain what Frank R. Paul had painted.

"Paul's back covers, such as "Golden City of Titan, "Quartz City on Mercury," and "Stories of the Stars - Alphecca," are masterpieces of science fiction art. The artist's training in architecture shows in all his work, but the style is unique. There is a two-dimensional flatness, as if the Italian Renaissance had never introduced perspective. Paul's paintings border on primitive art; they are charming, and almost childlike in their imagination and sense of wonder." Robert Lesser, Pulp Art, 1997, Gramercy Books, New York, pp.27-28.

This piece is another of my favorites; the dramatic composition really evokes a sense of wonder.  I find myself panning my head up as if stopping on a sidewalk to look up at a New York skyscraper.  This was one of the many inspirations for my illustration of The Tower of Babel.

Apparently other people liked it, too, because it was used for the front cover of Nebula Award Stories Vol. One, edited by Damon Knight and published by Stealth Press: 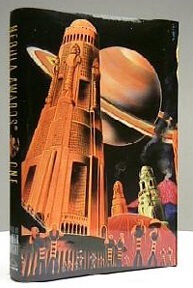