Not meant to be a comprehensive tour... But it shows off my favorites. And not all of it is kitsch, either -- One cannot live by kitsch alone. 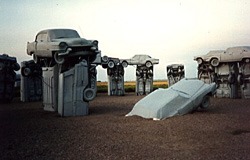 Church of Elvis (OR)

All around this country there are visionaries, artists in their own way. Many of them create enormous objects: humongous concrete fish, towering dinosaurs, giant archers. And just about every one of them has met with opposition from small-minded, humor-less local officials. Why does everyone who does something larger than life have to put up with these nigglers and whiners? Critic say that Shakespeare could not have written all those plays. Mark McGwire hits seventy home runs and critics say, oh, he takes drugs, the pitchers are lame this year, the ball parks are smaller than they used to be. Dixie the dinosaur has to put up with local politicos who say her builders never got a permit. Carhenge designer Jim Reinders is told he has to build a paved parking lot, put up signs and erect a toilet. Ken Fox's first monument meets with highly charged responses.

Where does this opposition come from? I suspect that many of the critics are insecure; perhaps they doubt their own abilities to do great things or imagine that McGwire and the creators of Dixie and Carhenge make them look bad. I say, get a life. Though I may occasionally seem to poke fun at these dreamers, this page is here (largely) to celebrate their creations, the grander, gaudier and more ambitious, the better.

Links to other Kitsch sites:

Well, it winds from New Jersey to the bay area, more than one dozen states along the way - it's not Route 66, but Route 40 and, to quote Frank Brusca, "Mile-for-mile, you won't find a more interesting or more scenic way to travel across America." Check it out.

Janet Friedman has written the ultimate travel guide to kitsch, called Eccentric America, which advertises itself as "Weird, Wacky, and Outrageously Fun things to See and Do in America."  Find out how to find the Museum of Questionable Medical Devices, SPAMarama, Mike the Headless Chicken Days, and the future birthplace of Captain James Tiberius Kirk.  I've ordered my copy - have you?

Roadside America has a comprehensive listing of all sorts of kitschy stuff here.

Billinton's House of Mystery is here.

Mark Jackson has a wickedly cool site of Roadside Oddities/Eccentric America. Did you know that San Luis Obispo, home of one of the most important Spanish missions in California, has an alley covered with chewing gum? I didn't, but Mark has fotos to prove it.

I think Carhenge beats Cadillac Ranch by a mile.  Great pages, and wonderful art.  Speaking of art, we have a couple of sites that specialize in all things artsy:

The Museum of Depressionist Art

The Gallery of the Unidentifiable  http://www.dearauntnettie.com/gallery-of-the-unidentifiable.htm

Both of these are sprouts from the fertile mind of Aunt Nettie:

I would love to exchange links with you.  I'll resize your link button to fit the links page, if that's ok with you.

Hey-- I am a big fan of your website.  Could you please add this link to your site?

Brittin adds: This site tells the saga of a 35-year-old phenomenon in rural West Virginia. In 1966 more than 100 people claimed to have seen a giant winged man that stood over 7 feet tall. Some believed this strange occurrence to be an alien while others thought he may have arrived to deliver a prophecy. The website offers the history and the legend of the Mothman, as well as the Mothman prophecies and world sightings.

Back to Science Fiction and Humor Writing

Back to Science Fiction Art