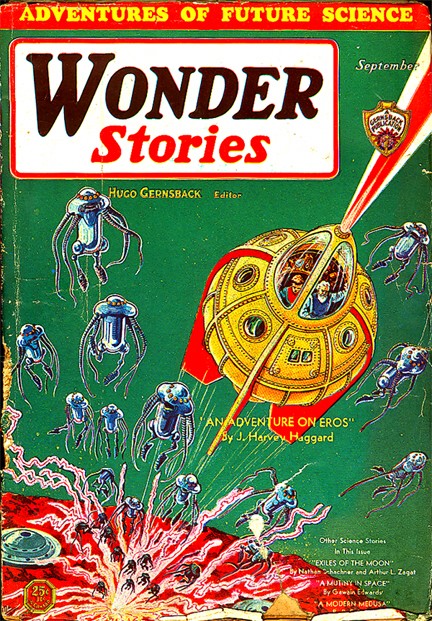 Cover art by Frank R. Paul for September 1931 Wonder Stories, illustrating "An Adventure on Eros" by J. Harvey Haggard: "A world in the grip of strange forces.... the metal men let loose.... sure death awaited them...."

Time: A.D. 2012. ... Professor D Four-Ten and his prize student K Two are in space not too far away from Eros when their ship begins to act strangely and they receive a radio message about a swarm of electro meteors that have brushed by the fueling station on Eros and created problems. * The spaceship is attracted to Eros, where it barely escapes destruction on landing. Then a swarm of natives attacks the ship. Normally, the tentacular, civilized Erosians are friendly, but perhaps the electrical situation has irritated them.  And the ship's disintegrators are not working. Then the ship is hurled away by an electric charge. At this point the young man awakens. It has all been a sleep-learning training film played from a tape. Professor D Four-Ten is now ready to examine the student.

From the rocky surface of the planet below the weird metallic inhabitants of Eros were floating upward - creatures with a tiny ring of eyes about the upper portion of the cylindrical body. A vast squadron of the creatures were materializing from a series of what looked like ant mounds, and they maneuvered swiftly upwards. ...

"There is but one thing we can do!" cried [Professor] D Four-Ten. "That is to prepare for battle. Perhaps with our ray disintegrators we can make some headway!"

Now that we faced a tangible danger which could be measured with our own capabilities we fell to with a common will. The breathless moments just past were forgotten, and I swiftly got one of the disintegration controls ready. I stood at a control at the front of the sphere near the pilot's seat, and the Professor ran to the rear of the sphere where another ray machine was stationed.

As the long flight of metal figures approached from below, the tentacles from their middles unwrapped and stretched forward in anticipation! 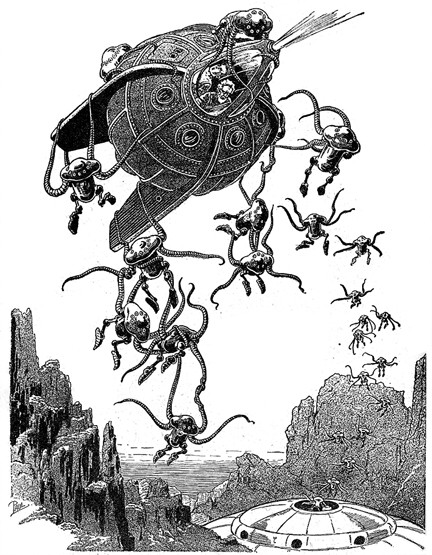 Interior art from the same story and close-up of one of the creatures of Eros. 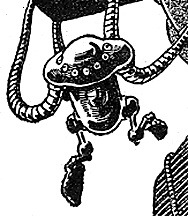