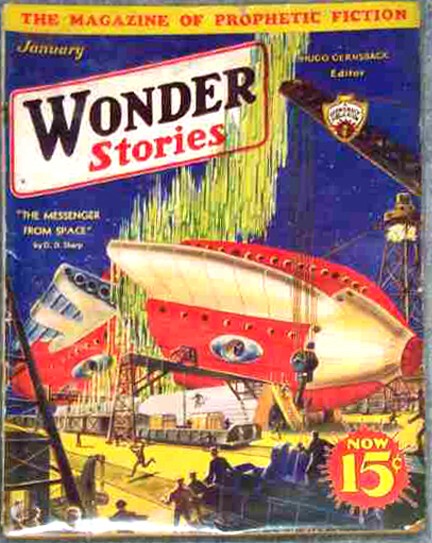 A mysterious yellow spaceship lands momentarily on Earth, then leaves, setting off a wave of speculation. Grinstead, a noted scientist, works out the proper solution to the mystery. He theorizes that the space visitors have hitched a ride on Reinmuth (1932-HA), a small planetoid whose orbit passes close to Earth, Mars and Venus.  He urges that Earth develop a spaceship to visit the planetoid. * The Blue Bird is nearly completed when a mysterious act of sabotage cuts it in two.  This vandalism does not abort the expedition, for Grinstead's associates simply weld the ship back together and fly to Reinmuth, which is barren.  All along they are pestered by a mysterious stowaway, both in space and on the planetoid.  *  The explanation, which is presented with cumbersome complexity, is that the mysterious visitors do not want Earth to enter the space age.  They attack the explorers.  There are battles royal on the surface of the planetoid and in the Blue Bird.  Enough of the Earthmen survive to return to Earth.

Bleiler adds a note (which relates to the illo):

Characteristic of the planetoid is a fantastically heavy element that is practically uncontainable in normal Terrestrial gravity. The visitors used a spray of it to cut through the Blue Bird while it was being constructed; the spray continued on to the center of the Earth. Sharp probably had neutronium in mind, though the fit is not exact.