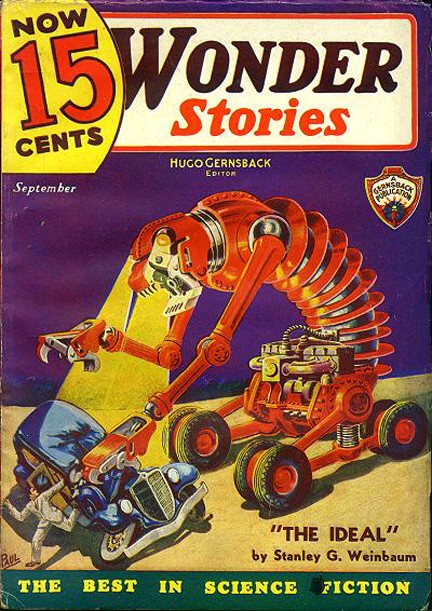 Illustrating (more or less) "The Ideal" by Stanley G. Weinbaum.

The story and its tangential relationship to the cover illo are summarized in Science-Fiction: The Gernsback Years, by Everett F. Bleiler with Richard J. Bleiler, Kent St. Univ. Press, 1998, pp. 479-480:

[Playboy] Dixon Wells again visits [eccentric scientist and his former instructor Haskel] van Manderpootz, and as background [author] Weinbaum offers a version of the legend about Roger Bacon and the brazen head he constructed. Van Manderpootz brings the legend into relevance by announcing that he intends to build an omniscient device in the form of a head.  This is possible for the great savant since he has already discovered the basic unit of time (the chronon) and space (the spation).  Beyond these and other subatomic particles is the cosmon (the ultimate), and from these can be constructed the psychon (the unit of thought). * When van Manderpoots constructs his device, it turns out to be a mechanism for viewing the ideal of anything thought of. Since som risk may be involved in extracting psychons from the brain, Wells is the first to use the idealizator, and, naturally, he thinks of his ideal woman. She appears, and once again Wells is floored and devastated thinking of her.  *  Some time passes, during which the oversexed, undergratified Wells languishes, until van Manderpootz observes the image of Wells's ideal woman. She turns out to have been a stage star of the part - her image preserved by cryptomnesia (not Oedipus complex, as Weinbaum states) in Wells's memory.  Better yet, van Manderpoots knew her, and even better, her daughter, who resembles her closely, is coming to study with him.  When Denise d'Agrion turns up, Wells falls in love with her, and she seems interested in him. The crash comes when Denise insists on using the idealizator and concentrating on the utmost horror. She is petrified, and when Wells tries to rescue her, his image becomes mixed with that of horror, ending his chances - especially when she marries the psychologist who has been attending her since her collapse.

About the connection between the story and the illo, Bleiler wrote:

A secondary element, generally considered more interesting than the primary, is the mechanical "beast of prey" that van Manderpootz has designed to "kill" automobiles. Constructed roughly in an erector-set likeness of a carnivorous dinosaur, it is activated by photoelectric cells that convey the image of an automobile to an electronic center. It is programmed to lounge forward, seize the automobile, and drain its fuel. This scene, suggested rather than actual, served for Paul's well-known cover and inside illustration.

This is a wonderful cover; one of my favorites.  Apparently, Pulps on CD Rom thought so, too.  They liked it enough to use the image on advertisements for CDs of pulp magazine covers. 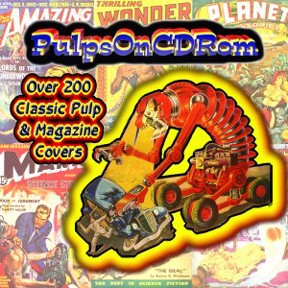