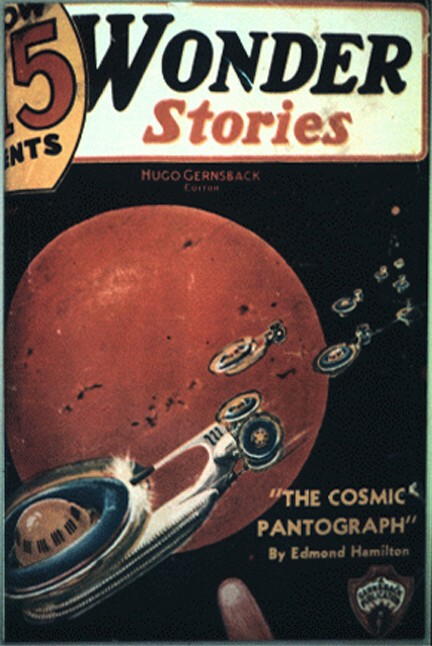 From the Space Educators' Handbook: "The armada of spacecraft shown on the WONDER STORIES cover feature enormous fuselages with three decks for passengers. Note the hundreds of viewing windows suggesting individual cabins or seats similar to the design of ocean liners. The design of the propulsion systems of each spacecraft is a mystery. Some type of nozzle appears to be emitting a rocket plume onto the circular upper structure toward the front of the vehicle. The design of the circular structure is replicated on a smaller scale by the four saucer- like craft at the spacecraft's rear. These appear to be deployable "flying saucers" which could be intended as sortie planetary landers. Hidden amidst the four rear saucers appears to be an engine cowling which would explain the translation of the vehicles toward the left of the scene. Since the tale for which the cover sketch is composed was not available, the intent of the artist's technical design is unknown."