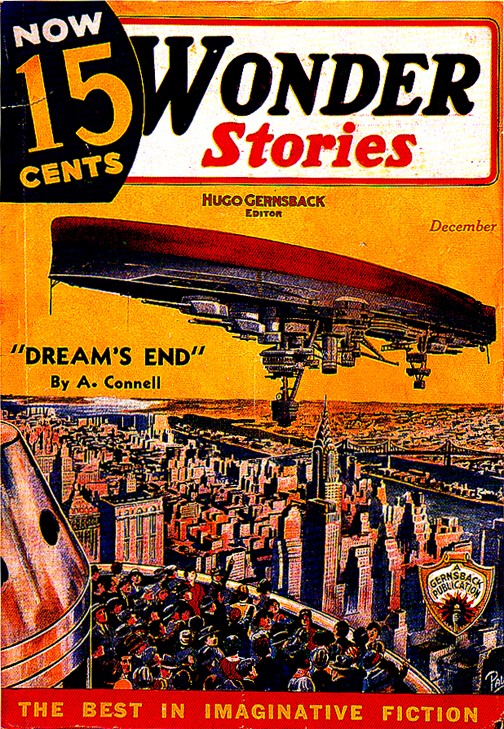 "Frank R. Paul's formula for stopping potential SF readers in their tracks was first to concoct an idea that defied apparent logic and then to establish a color scheme that was impossible to ignore." Vincent Di Fate, Infinite Worlds, 1997, Penguin Studio, p. 232.

This is my favorite Frank R. Paul cover of all time.

A summary of the story, from Science-Fiction: The Gernsback Years, 1998, by Everett F. Bleiler with Richard J. Bleiler, p. 83:

"Strange things. David Lane sees his sweetheart levitating while she walks, turning into something very strange, then disappearing. Massey Dune, astronomer at the observatory, sees stars race across the sky, disappear, and appear as new constellations. When a great soprano starts croaking like a frog, her audience disappears.  (What is so unusual about that?) And Harry Dexter, who has insights, writes down his impressions of strange things that are happening within his perception.  Harry theorizes that the universe is a dream of a cosmic dreamer, and that the dreamer is awakening.  He is right.  Lewis Carroll made the same speculation in Through the Looking Glass."

This image, in the form of a poster of a fan tribute oil painting done by Anton Brzenzski is available from: Terry Holdings, LLC, http://dreamwater.net/biz/4ecollection/page3.html. This is image no. 007 in their Forrest J. Ackerman collection.

The cover is reproduced in the auction catalog for The Sam Moskowitz Collection of Science Fiction, Sotheby's, New York, p. 27.