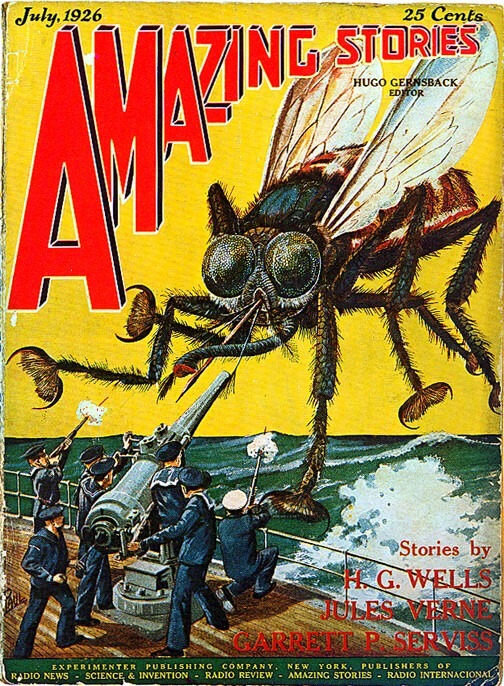 "Although Frank R. Paul's artwork could be correctly characterized as crude in its application of color and primitive in its drawing, the importance of his work to the evolution of science fiction art cannot be overstressed, since it contained within it the basic iconography of the genre. True, the European artists has made attempts at SF illustration before Paul's time, but it fell to Paul, with the editorial guidance of Gernsback, to create the basic images that consumers would come to identify with science fiction. His illustrations portrayed huge, complex machines, titanic spaceships, outlandishly strange aliens, and vast, sprawling cityscapes with flocks of distant birds and exotic flying machines plying the skies. No one could look at a Frank R. Paul painting, with its sense of marvel and invention, and mistake its subject matter for anything but science fiction, regardless of any artistic failings it may have contained." Vincent Di Fate, Infinite Worlds, 1997, Penguin Studio, p. 27-29.

In an additional note, Curt Siodmak, who wrote the story that inspired the illo, later went on to Hollywood where he wrote or co-wrote stories and scripts for some 35 U.S. films, including The Invisible Man Returns (1940), The Wolf Man (1942), House of Frankenstein (1944), Earth V. the Flying Saucers (1956), and the unforgettable Curucu, Beast of the Amazon (1956).