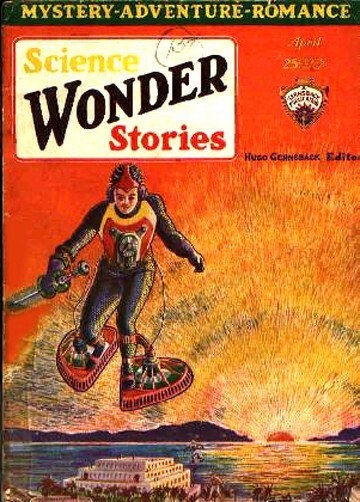 Time: 1950 and A.D. 2999. Place: California. * In the 1950 frame, Bayers, Professor of Physics at the university and a notorious controversalist, claims that time travel is possible. Indeed, after an absence from the campus, he returns looking somewhat bedraggled and claims he has been into the future. His listeners scoff. * His story: Despite his earlier theorizing, matters really began when a small time-sphere materialized in his lab, bearing a holographic (my term) image of a beautiful woman named Editha. He studied the apparatus and constructed a larger model, in which he set forth, hoping that since he duplicated the previous machine, he would arrive at the era from which it was dispatched. * Bayers, after some minor problems, finds himself in a strange area: It is all wild and beautiful, but in the distance are white buildings. Approaching him is a tall strangely clad man, walking on the air with peculiar shoes. But then he sees that it is not a man, but a woman. She bids Bayer follow her, and he is taken in an aero to the central intelligence division, where women question him. When he says that he came from the past, the women do not disbelieve him, but comment that experimentation in time travel has been discontinued, since they want no disturbance from the males in the past. From this, Bayers learns that the future society is a gynecocracy. * Background: After a World War in 1938, there was a really terrible war in 1969, during which about half the human race died. After the second war an international league was set up with a governing body, prohibition of war, international support measures, and a general socialist approach. By 1998 the members of the congress were overwhelmingly women, who then established a feminist government. Over the course of time genetic engineering increased the size and strength of women and diminished the height of men to about five feet. Men now live as pampered pets or tolerated second class citizens who have no say about anything. Fortunately, Bayers's time machine is concealed, so that the women cannot destroy it. * Bayers conforms externally to the new world, although, as later becomes obvious, he does not know everything that is going on. Meeting some of the future males, who are small, weak creatures, he becomes involved in an underground movement and agrees to help them gain freedom. Since (because of his height) he can pass as a woman if visibility is poor, he is chosen to disable the control center fro the mechanical apparatus of the culture. With this control center in their power, the men hope to win an equal share in the government. * Bayers intends to do his part, but who is in charge of the control center but the beautiful Editha of the time sphere, who scornfully tells him that his attempt would have been useless because of safeguards. One word leads to another, whereupon Editha attacks him. Bayers, who wrestled in previous life, has almost met his match in the Amazon, but manages to overcome her with jujitsu pressure points. She is humiliated, but when he kisses her, she responds, and they become lovers. Their love is [by no] means smooth, however, for EdithaÃ­s feelings are ambivalent. On the one hand she loves Bayers, but on the other she bitterly resents the fact that a man has overcome her Ã± and their wrestling bouts continue. * The end comes when Editha is chosen to be one of the Mothers. Flagg is not entirely clear as to what is involved, but the Mothers are immortal, or nearly so, and are in charge, in some way, of the breeding programs. Judging from Editha's initial response, however, the new status involves brainwashing or diminution of personality. * Editha finally accepts the new status, whereupon the matrons declare that Bayers will be her mate. Again, while details are not provided, he will perhaps become a mindless stud, artificially maintained in life. * The machines carry Bayers off, as he protests. But the measures that would have restrained a future man are not enough for Bayers, who escapes and returns to his own time. His listeners in 1950 scoff, but he displays on his chest an enormous brand indicating his status in Editha's world.