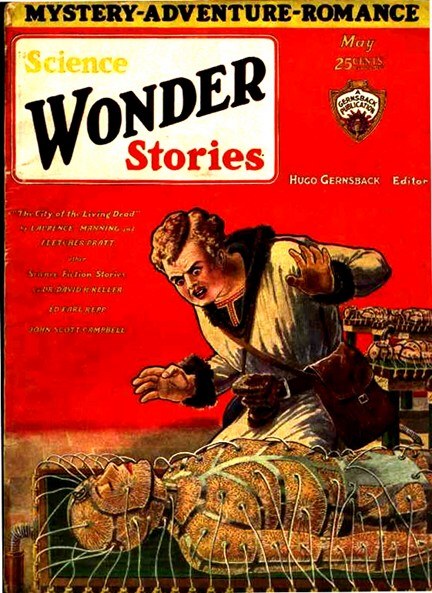 Cover art by Frank R. Paul for May 1930 Science Wonder Stories, for "The City of the Living Dead," by Laurence Manning and Fletcher Pratt.

Time: around A.D. 4500. Place: exact location not clear, but the people concerned seem to be Scandinavians.  Their land is near the ancient country of Anglesk, but is isolated by a new mountain that has arisen, blocking entrance. * In the land of Alvrosdale, the culture is not barbaric, but mechanical civilization has died, and machines are regarded with horror and aversion. Since the land is small and overpopulation is a problem, each year, on a certain day, a number of the more adventurous young people take artificial wings and try to fly over the mountain to the fair, but deserted lands of the Anglesk on the other side. Quite a few die along the way. * The chief elder, Hal Hallstrom, tells candidates of his experience when he was young. There were no wings then, and he climbed the nearly unpassable mountain and descended with great difficulty and peril. (He seems to have been the first to do so.) * He found a great, pleasant land with many ruins, some filled with elaborate, decayed machinery, but never a living soul. eventually he saw a light, and entering a building, found many corpses covered almost completely with wires.  To his horror, some were alive, though almost motionless. He then encountered an ancient man, who was ambulatory, but was covered with wires. * The ancient man, applying a thought helmet to Hal, taught him the language and told him what was going on. Over the centuries, the English became more and more jaded, abandoning actual life for synthetic thrills like radio, motion pictures and television. Thus, when a medical breakthrough provided artificial sensory organs, the next step was programmed adventures, at first realistic, but then wish-fulfillment exploits for the individual. There were enormous libraries of such artificial lives. The individual, his sensory organs removed, was hooked up to dream machines and provided with mechanical artificial sustenance. Life was thus abandoned for the illusion. It is the old man's task to care for the dreamers, who never merge from the machines, but since the task is overwhelming, he attends only to his friends.  The old man, who was not totally wired, would like to see Hal's land and showed Hal how to make artificial wings. They flew toward Alvrosdale, but the old man died along the way, and Hal returned alone with the secret of the wings, which are apparently gliders. * Pratt's writing mannerisms are sometimes annoying, but the story does hold one's attention.

My comments about the illustration:

This woman's face has always struck me as particularly and unintentionally strange and disturbing - more scary even that the wires and weird wrinkles on the man, which are admittedly unsettling. A reader wrote about Paul's work in Amazing Stories (although the comments would apply to Paul's work throughout his career) as follows: "Mr. Paul is a remarkably apt illustrator, especially considering the manuscripts with which he is obliged to work. However, an abnormally large head or forehead is indicative of one of two things, undeveloped babyhood, or a moronic condition. Eyes that are too bright often mark a lunatic. Perhaps Mr. Paul is indulging in a little delicate satire at the expense of your writers in portraying the intellectual (?) character of the activities of the leading men." (Amazing Stories, March 1929, p. 1151)

Aside from (or partially because of) the woman's face, this piece is extremely creepy.  The wires going into (or out of?) the corpse's body are very disturbing.  Something David Cronenberg might enjoy.  One thing I would have added if I were doing this illo would have been more of a suggestion of the ruins around the dead body, and perhaps some cobwebs - so you couldn't quite tell what were cobweb and what was wire.  Plus a couple stray insects and spiders would have been nice, too.