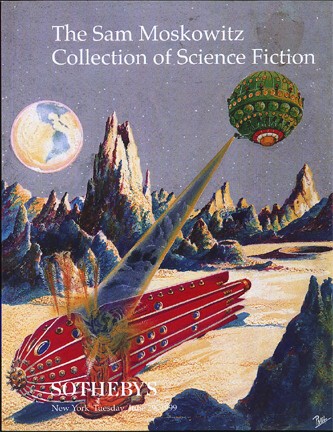 The original Paul painting was sold at the auction, and pp. 30-31 of the catalog reproduce the cover with this commentary:

"Frank R. Paul is universally recognized as the father of all modern science fiction artwork. To quote Arthur C. Clarke from Sam Moskowitz's own files, 'The very first science-fiction magazine I ever saw had a cover by Frank Paul - and it is one of the most remarkable illustrations in the history of science-fiction, as it appears to be a clear example of precognition on the part of the artist!' Paul has this same effect on many other science fiction authors, from Aldiss to Asimov, from Sturgeon to Williamson, they have all acknowledged his influence and inspiration during their early years as fans and later as authors. Though his work has been criticized for having stiff figures, and being dated in [today's] technologically advanced times, it is just that 'sense of wonder' and almost Victorian flavor that give his paintings their now unmistakable identity. Sometimes it seems as if the characters themselves have stepped directly out of a moment of time from the film 'Metropolis,' or they have lept from the pages of the first edition of H.G. Wells' 'The War of the Worlds,' or given the reader a startling new visual secret from Edgar Rice Burroughs 'The Mastermind of Mars.' Frank R. Paul was the only artist beside Howard v. Brown to do covers on a regular basis for Hugo Gernsback's early publications. He virtually dominated the covers for Amazing Stories, Amazing Stories Quarterly, Science Wonder Stories, Science Wonder Quarterly, and the mid 1930's Wonder Stories for Gernsback. Not a single black and white illustration or cover painting from the Amazing Stories period are today known to exist. There are only three paintings in existence from the year 1929 from Science Wonder Stories and only a handful from the following year 1930. This particular example is exceptional for its silver background and simplicity of design. It would not be inappropriate to refer to this Winter 1930 Science Wonder Quarterly cover painting as a masterpiece from the Golden Era of science fiction magazines.