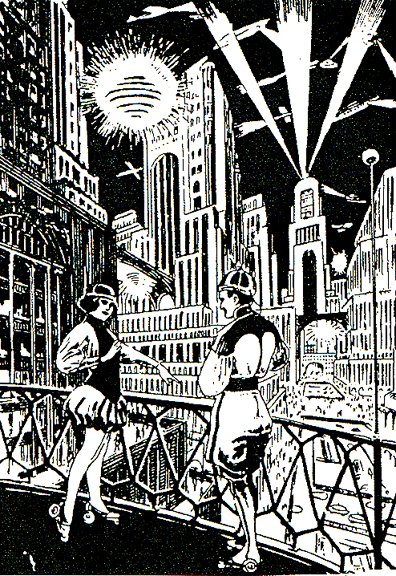 While it's not a particularly well-told story, "Ralph", originally published in March 1911 - April 1912 Modern Electrics, is interesting as a vehicle for prediction and a catalog of imagined 27th century technology, including all kinds of wild inventions unheard of in 1926, including television, fluorescent lighting, juke boxes, solar energy, television, microfilm, vending machines, and a device we now call radar. In fact, Gernsback described radar so precisely that when Sir Watson Watts of Great Britain applied for a US patent for radar, the Patent Office turned him down. Gernsback had, in a sense, already invented it.

Ralph was re-printed in book form in 1925.  Here are some of Paul's interior paintings for that pressing (including a painted version of the image above):

This ad for the novelization appeared in Science and Invention, May 1927: