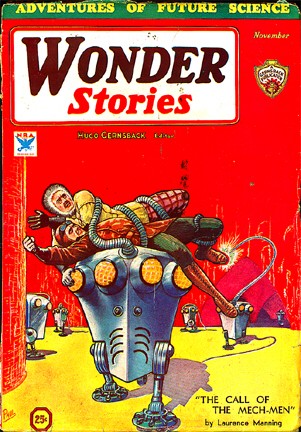 Cover art by Frank R. Paul for November 1933 Wonder Stories, illustrating "The Call of the Mech-Men" by Laurence Manning.

It was a shiny metal box set upon three squat, jointed legs. At the top was a series of round glass bulbs, very heavy and thick, and the box on which these set was two feet thick, and perhaps four feet high. A cable of overlapping rings - like the metal cable that covers electrical wires when they run through joists and beams in buildings - projected from the very top, and trailed motionless upon the ground before us. In startled silence, we eyed this machine. Stanley shifted nervously upon his feet and cleared his throat.

"If we could only squeeze past that machine. I can make out a passage beyond it," I suggested.

"I'd sooner get the machine out of the way first," he replied. "Did you use all of your dynamite?"

"All but one stick."

"That might be enough to blow that thing to pieces. what do you suppose it was set there for?"

I did not reply. the two of us stood there in uneasy silence another moment. then "I'm going back for that dynamite," Stanley said, and turned to go. What happened next was almost too quick for eyesight to follow. Like a flash of lightning, the steel cable stiffened out and whipped itself around him. with a terrible scream, Stanley was lifted bodily into the air and draft swiftly inside and out of sight. What I saw had a horrible sort of fascination for me. But I turned away and made two steps toward safety, my feet seeming to be weighed down with lead - they moved so slowly. then I felt a terrible constriction around my waist and I too was raised into the air and drawn into the mouth of that mysterious passage; flung down on the hard stone beside my companion. There was a clang as the door was shut, and we lay in complete darkness.