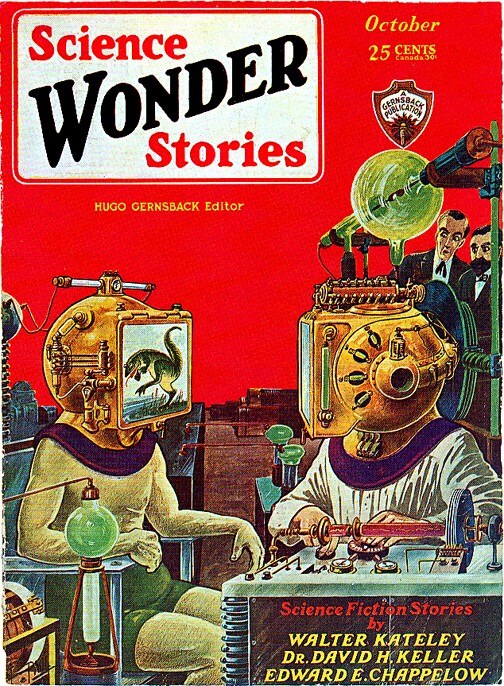 Here is the summary of the illustrated story from "Science-Fiction: The Gernsback Years," by Everett F. Bleiler, with the assistance of Richard J. Bleiler, 1998, Kent St. Univ. Press, Kento, Ohio, p. 304.

Bleiler writes: "Short story. * The great maverick scientist H. A. Macey, M.D.,  is about to give a demonstration of his discoveries to two  fellow scientists who are more favorably inclined toward him than  most  of his colleagues. * Macey has been working on recovering ancestral memory, which he accomplishes by first putting a subject into  hypnosis, then encasing both subject and himself in thought  helmets with viewing screens that show memory content. Along with Macey's concept of ancestral memory runs a system of typology, in which persons who look reptilian "take after" ancient reptilian  ancestors. * On the present occasion, Macey has as his subject a low-grade local man who looks frog-like. * Macey puts the man through  his process, and brings up pictures of a Neanderthal family. He  probes farther and farther back, until he reaches a group of giant  plantigrade frogs, who must have been our distant ancestors. As the scientists watch, a monstrous creature gobbles up the frog that the subject was empathizing with. When the subject recovers from the shock, Macey hypnotizes away his memory of what has happened, and  all is well."

Bleiler also comments: "Near the end of the story [editor Hugo] Gernsback offered $50 in prizes for the best letters explaining the single great fallacy in the story. The response was heavy."

This particular image apparently remains really popular, even internationally.  The Italian ezine Delos used it as a cover image: 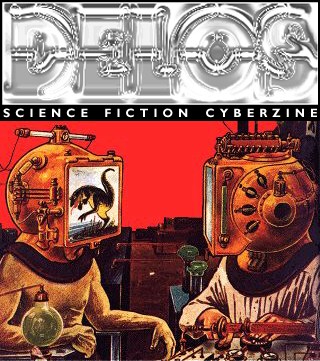 The Japanese NHK educational TV program "NHK Human University" also used Paul's image, but, to their credit, they gave him a credit on their website. 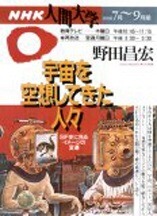 "Paul did ... have an excellent understanding of the need to make his covers suggest stories to the readers for whom the magazine was meant. He read the stories carefully, with an eye for technical detail and a quick sense of a scene that would make a dramatic cover. He wasn't necessarily looking for the human conflict, but for the situation that was suggestive of future wonder." Lester Del Rey, Fantastic Science-Fiction Art, 1975, Ballantine.