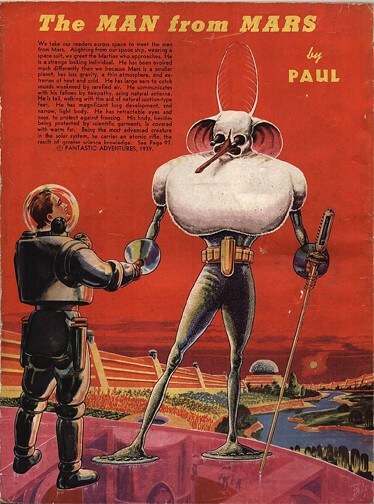 Art by Frank R. Paul for May 1939 Fantastic Adventures, back cover.

This illo was reprinted as the cover of Fantastic Stories, Sept. 1965.

The 1939 back cover text reads: "We take our readers across space to meet the man from Mars. Alighting from our space ship, wearing a space suit, we greet the Martian who approaches. He is a strange looking individual. He has been evolved much differently than we because Mars is a smaller planet, has less gravity, a thin atmosphere, and extremes of heat and cold. He has large ears to catch sounds weakened by rarefied air. He communicates with his fellows by telepathy, using natural antennae. He is tall, walking with the aid of natural suction-type feet.  He has magnificent lung development, and narrow, light body.  He has retractable eyes and nose, to protect against freezing. His body, besides being protected by scientific garments, is covered with warm fur. Being the most advanced creature in the solar system, he carries an atomic rifle, the result of greater science knowledge."

This was reproduced on the cover of the Sept. 1965 issue of Fantastic Stories: 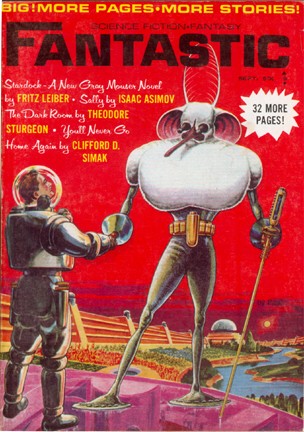 This issue also reproduces from 1939 some text (credited to Paul): "Science tells us that is is logical to believe that other planets are inhabited by some form of life. Just what type isn't exactly certain, but astronomy points toward definite planetary conditions which can be taken into consideration in imagining what type of "man" that planet would be most likely to develop.  On our [front] cover we have conceived of the Man from Mars, as he most logically might exist.

"Mars, the oldest of planets, cooled faster than its larger brothers.  Its location also aided in its rapid advance, and life must have appeared there long before on earth.  Therefore, our Martian must be more advanced, more evolved than we.  Considering his planetary environment he would most likely possess the following features.

"Mars' lesser gravity would give him great stature, would provide the necessity for rather peculiar modes of locomotion. Therefore, we can give him suction feet, rather frail, thin body, and large head. Thin atmosphere would make large ears necessary to catch sound, would give him enormous lung development, and would tend to make him develop telepathy as a more practical method of communication.  A very cold climate would clothe him with heavy warm fur, white in color due to the absence of color-producing sunlight. His advanced science would aid him by providing extremely efficient protective clothing as a most necessary factor in his life.  He would also possess an evolution permitting protection of delicate eyes and nose against cold through retraction into the body.  All in all he would be a highly evolved creature with great science knowledge and high intelligence."

Paul's Martian is reproduced in Outre magazine, issue no. 32.

Similar, but less friendly beings re-appeared the April 1940 (incorrectly noted as April 1939 several places online - thanks, Gary Westfahl, for noting this error) on the cover of Gernsback's Superworld Comics: 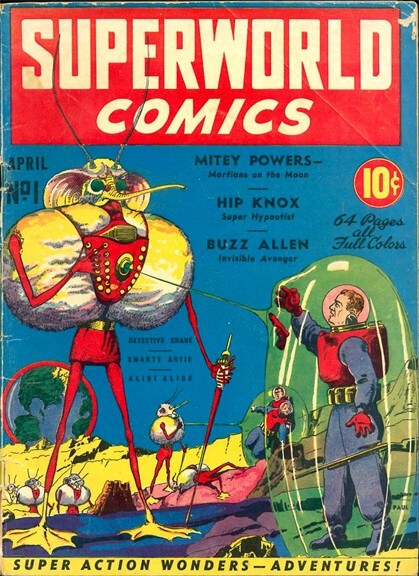 A very funny take on this was an illo Paul did for the back cover of the July 1940 Amazing Stories.  In this image, we sees ourselves "As Mars Sees Us."  The accompanying text reads: "A Martian reconstruction of the Earthman, deduced from what he can discover of our world by observation and analysis, might very logically be such a creature as is shown here." 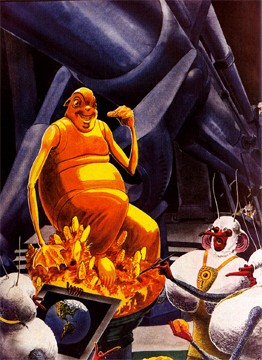 The Martians had deduced that, since Earth is three-quarters water, then humans would probably be quasi-amphibian.  Due to the abundance of food, he would be a "fat, contented creature, with a large body, bullet-head, short legs, and webbed hands and feet... [W]e of Mars can well be jealous of Earth and its inhabitants."

The creatures of the fourth planet reappeared in a Paul drawing of a "Male Martian" for the March 1953 issue of Science-Fiction Plus: 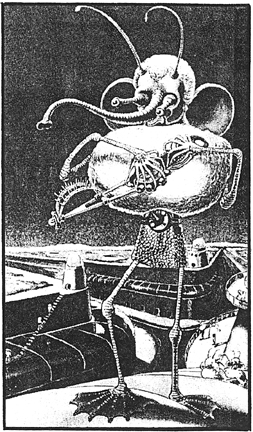 This is a reprint of the Male Martian interior illustration Paul had originally done for Quip, Hugo Gernsback's Christmas 1949 magazine.  The original artwork for this image was sold at auction at Sotheby's in 1999, as part of the Sam Moskowitz collection.  The auction catalog describes it as "Original Artwork For Illustration For Quip Magazine. New York: Hugo Gernsback Publications, 1950's. Pen and ink with brush and airbrush on illustration board, signed by the artist lower right hand corner, in excellent condition, matted. 12in. by 9 1/2in. (30.5cm. by 24.1cm.) [pre-auction estimate:] $1,000-2,000." (Sotheby's auction catalog, p. 61).

And this image appeared on page 4 of Science Fiction Plus from March 1953 [Thanks so much to FOP (Friend of Paul) Carlos A. Altgelt for this and the next image]: 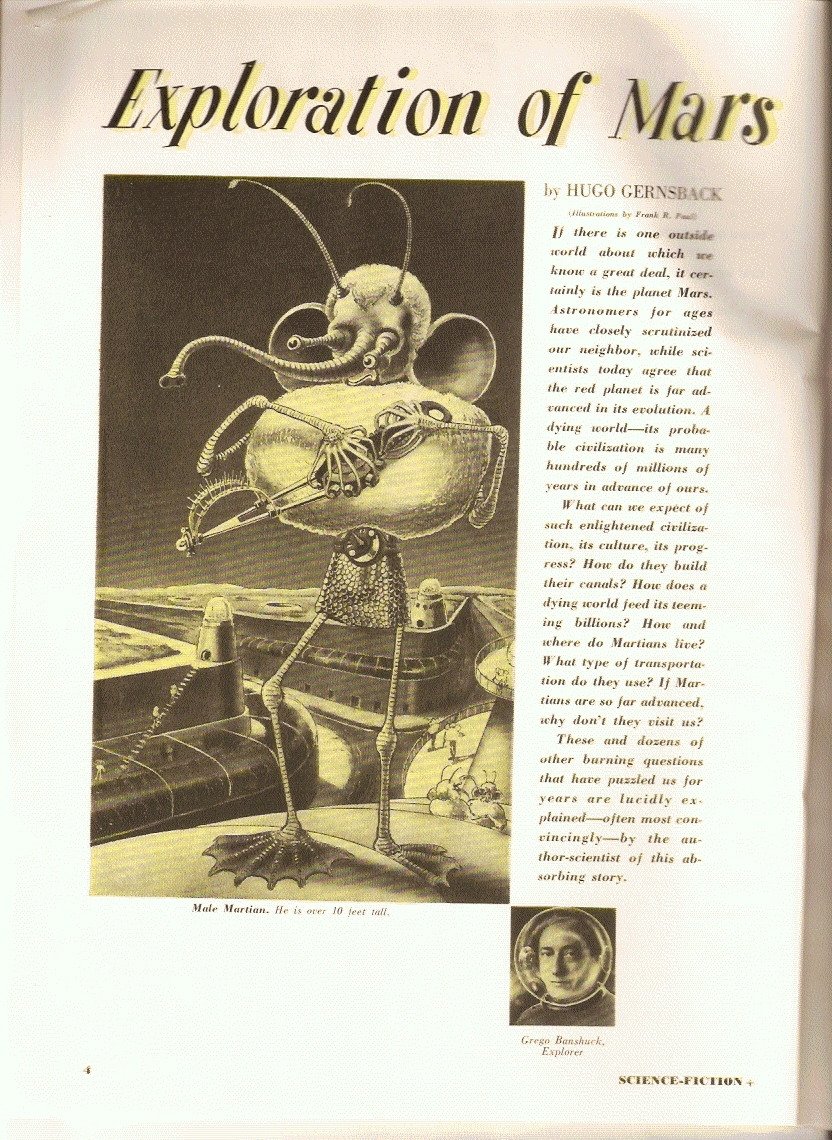 This image, colorized, re-appeared on the August 1954 cover of the Argentinian magazine "Mas Alla" (Thanks again to Carlos A. Altgelt):

This concept of a Martian first appeared in the Aug. 1924 issue of Science and Invention.  Here's the cover: 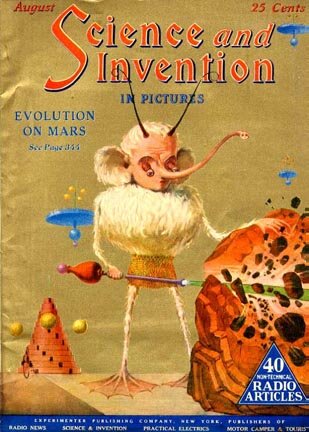 There seems to be some uncertainty as to who exactly did this cover.

However, the cover illustration is not credited, but does not appear to be the work of FRP.  The texture is not Paul-like; Paul tended to avoid painting fur.  Nor are the objects and forms in the Martian's head and body outlined and defined in the way Paul liked.  Nor are the colors as exuberant as Paul generally used.  Furthermore, a reference below suggests it is the work of an artist named "Browne," who may actually be Howard V. Brown, whom the Encyclopedia of Science Fiction (1993 edition, p. 164) tells me painted almost 50 covers for Science and Invention beginning in 1919.  [My overall conclusion is that the cover for the Aug. 1924 issue of Science and Invention was painted by Howard Brown based on Paul's design.  Gernsback would often have different artists do the interior and cover artwork for the same issue, related to the same article, using the same designs.]

Does this mean that the Martian was actually created by Brown and not Paul?  Perhaps, but I think not.  However, before we get into that discussion, I present some other recreations of Brown's version of the Martian.

In 1976 he appeared in a "TIME Man of the Year" portrait of Forrest J. Ackerman (a Fan among fans, the man who coined the term "sci-fi," who created Vampirella, who wrote the first fan letter published in a sci-fi mag, who founded the institution of the masquerade ball at sci-fi cons, etc. etc.).  This image, created by Josh Kirby, was published on the back cover of Amazing Forries, Ackerman's 1976 autobiographical magazine. The back cover and a close-up of the Martian are shown below.  The portrait also pays tribute to Metropolis, Phantom of the Opera (1925), Frankenstein and Paul's painting on the cover of the October, 1926, Amazing Stories, which inspired Forry to set off on his illustrious career.   The image was also reproduced, very poorly, in The International Science Fiction Yearbook, ed. Colin Lester, 1978, Quick Fox, New York, p. 233. 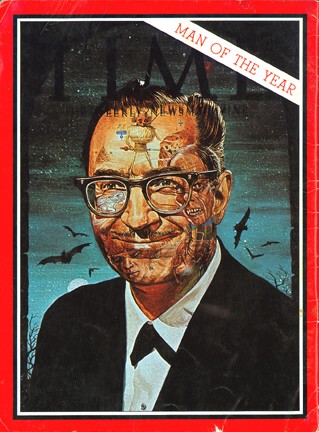 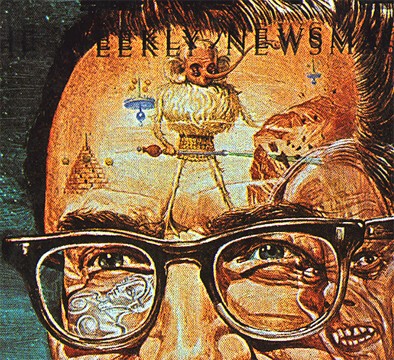 The Martian appears yet again on the cover of Ackermanthology!  This is a 1997/2000 book published by Sense of Wonder Press, in which Forrest J. Ackerman collected 65 short-shorts by Asimov, Bradbury, Merritt, Wells, et al.  On the cover is a fan painting by Anton Bzrezinski, mysteriously credited as "a recreation ... of a 1924 Science and Invention magazine cover by Artiste Browne."  The original painting, which hangs in 4E's Ackerman, also says Science and Invention 1924 at the top.  Here is the Bzrezinski painting: 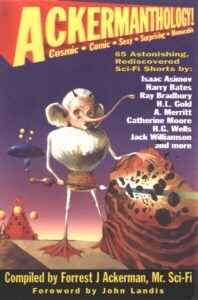 A poster featuring Paul's Martian is available as image No. 012 in the Forrest J. Ackerman collection at Terry Holdings, LLC, http://dreamwater.net/biz/4ecollection/page3.html. The poster is of another oil painting by Anton Brzenzski.

So let us return to the issue of whether the Martian was Paul's creation or not.  My conclusion is that it was probably Paul's.

It is important for the context of this discussion to remember that editor Hugo Gernsback would often split cover and interior artwork duties for the same stories between different artists.  Paul would in many cases do covers for, e.g., Science and Mechanics, while other artists would do interiors for the same article.

The issue that has Brown's Martian painting on the cover (Aug. 1924, Science and Invention) also features an interior artwork painting of the Martian by Paul: 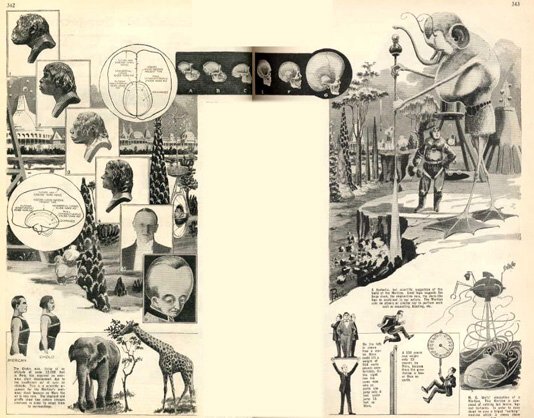 It is also curious that the Martian also shows up in at least one or two James Settles back cover paintings of Mars from Amazing Stories.

However, my scholarly opinion of who created the Martian is swayed by the credits listed above.  The 1939 Amazing Stories issue credits the text about the Martian to Paul, not just the image.  And the text clearly outlines the biological thinking that lead to the design of the creature.

In addition, Brown's style of alien-making differed from Paul's.  Paul had a background in architecture.  Everything he drew, from buildings to spaceships to machines, even his aliens, seemed constructed, perhaps not always believably, but at least he outlined every pin and bolt.  Brown had more of a tendency to simplify forms and just sketch things in with circles.  As examples, here are Brown's creatures from the covers of June 1935 and June 1936 Astounding (note the spherical heads and conical body - simple geometric forms that real multi-cellular biological entities on our planet don't use). 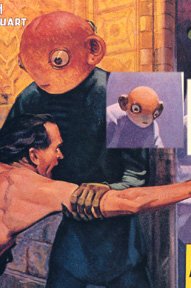 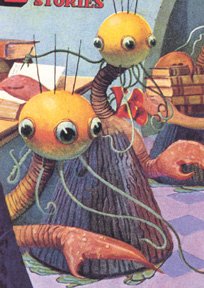 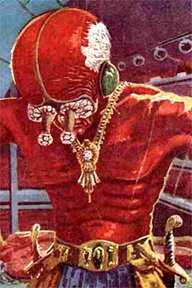 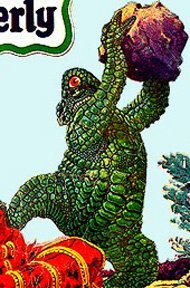 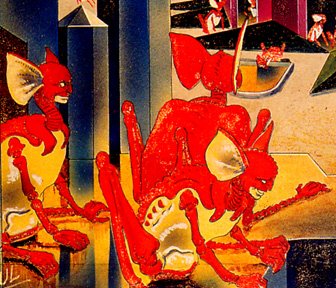 Notice how in Paul's aliens, every wrinkle and every joint is described.  The aliens are put together, constructed.

All totaled, these arguments lead me to believe that the Martian design was Frank R. Paul's.