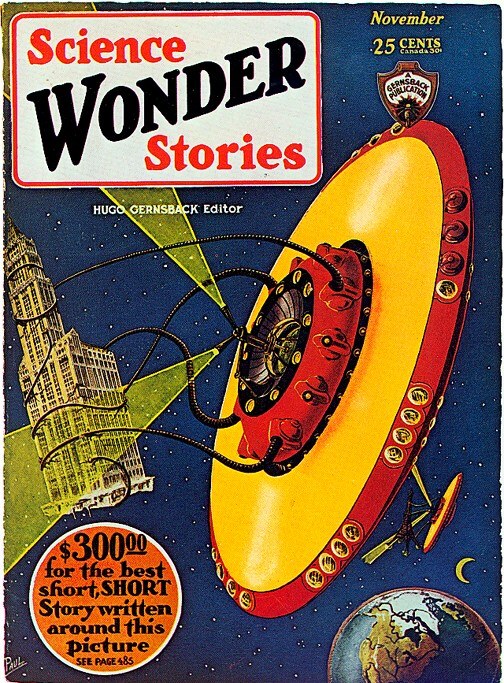 Cover art by Frank R. Paul for November 1929 Science Wonder Stories.  An important image, with much to be said about it.

As indicated on the cover, this illo was for a short story contest.  Tellingly, a lot of people seem to remember the cover but nobody remembers the winning story.

The popularity of this piece is underlined by its availability as a refrigerator magnet. It is included in the "Saucer Attack!" magnet set made by Blue Q and sold at Fridgedoor.com. 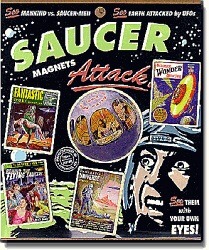 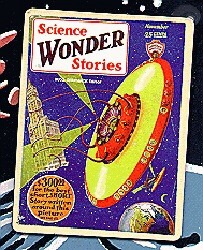 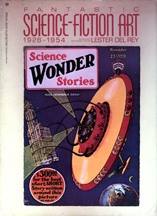 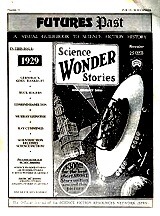 I think this image is so effective and memorable because of the masterful juxtapositioning of larger and smaller objects.  Our minds can calculate the size of the skyscraper in the foreground, but the flying saucer is huge compared to it.  The ship even dwarfs the earth.  Our brains tell us, yes, yes, the earth is small because it's so far away, but our eyes scream out, oh my gosh, these flying saucers are HUGE.  More often that not, it is the scale, the feeling of being completely overwhelmed by an enormous object or event that conveys the "sense of wonder" in science fiction. - F.W.

As noted above, this cover was the basis for a contest for the best story written around this image.  The winning stories appeared in the March 1930 Science Wonder Stories. Charles R. Tanner won the first prize ($150) for a tale entitled "The Color of Space."  This is the summary of his story by Bleiler in Science-Fiction: The Gernsback Years, 1998, p. 428:

The great scientist Dr. Henshaw, captured by the Russian scientist Godonoff, is currently in a flying saucer rendered possible by the Russian discovery of antigravity. As can be seen through the window of the spaceship, the Russians, to demonstrate their power, are off into space on their way to Venus with the Eiffel Tower and the Woolworth Building in tow.  In the meanwhile, war has broken out on Earth. Godonoff now demands Henshaw's (undescribed) secret process. * Henshaw, after a few questions, simply walks out the [spaceship] door and escapes - in New York, on Earth. What the Russians showed him was sophisticated motion-picture fakery. Henshaw realized that it was false when he saw that the Russians colored space blue instead of black. * Gernsback, in a note, states that the color error was deliberate. Perhaps.

Other winners were: John Robinson Pierce, for "Relics from the Earth", which won him $75, about a far-future expedition from Triton recovering souvenirs of mankind's past - before the earth was overrun by insects;

Frank J. Brueckel, Jr., "The Manuscript Found in the Desert," $50, in which the scene depicted in the cover art is shown to the story's narrator on an alien TV set found in a cave;

and Harold A. Lower (incorrectly cited by Vernon A. Lower on the contents page), for "Raiders from Space," $25.  According to Bleiler, the last is a short-short, with footage of the flying saucers carrying off the buildings appearing on a TV, greatly upsetting the viewers.  The images turn out to be fakes - a preview for a new German science fiction film about to be released.  Bleiler (p. 266) notes that this story was "[much] the best entry storywise, much superior to the higher-winning entries. A prevision of Orson Welles."

Skeptical physicist Milton Rothman even thought that this image was at least partially responsible for the post-war UFO craze.  He wrote:

"One of the results of a long and checkered career is the accumulation of assorted information, most of which does me no good. However, during this summer's flap over the fiftieth anniversary of the Roswell incident, I realized how my adolescent interest in science fiction aided my later career as a skeptical physicist. One of the very first science fiction magazines I ever looked at was the November 1929 issue of Science Wonder Stories, published by the legendary Hugo Gernsback. The cover of this magazine shows a spaceship that looks like a giant Frisbee, clutching in its tentacles a dwarfed Woolworth building. The cover was painted by Frank R. Paul, an artist whose skill at depicting scientifically advanced marvels set the style for the science fiction of the decade.

"An earlier issue of the same magazine (August 1929) shows on the cover a spaceship shaped like a giant soup bowl. Clearly, Paul enjoyed depicting space vehicles with shapes other than the conventional torpedo. This style was adopted by other artists. Just the other day I was poring through microfilms of The Philadelphia Evening Bulletin from 1936, on the trail of historical information concerning the Democratic National Convention of that year. Along the way I observed that the Buck Rogers in the 25th Century comic strip showed Buck cavorting about in a spaceship shaped just like a saucer. Paul's influence had rippled out over the years.

"The point is that the idea of space vehicles shaped like flying saucers was imprinted in the national psyche for many years prior to 1947, when the Roswell incident took place. It didn't take much stretching for the first observers of UFOs to assume that the unknown objects hovering in the sky had the same disk shape as the science fictional vehicles. It is nice to know that science fiction has had such a profound influence on society, but sometimes I wish it were not quite so profound."