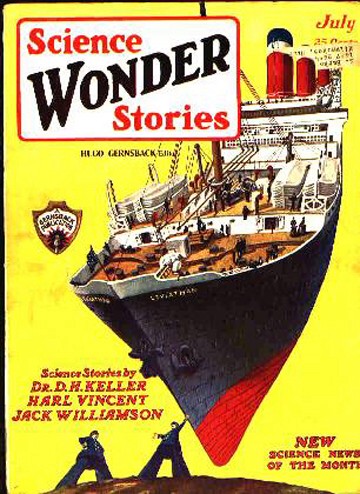 The perspective and layout of this piece bother me a little bit.  We see the two men from below, but we see the large ship above them from the top.  Paul pulled a similar trick (was he trying to disturb us on purpose?) in his image of the architecture of Titan.  In the Titan image, we see the towers from below, but Saturn from above.  Perhaps the ship and Saturn are at very strange, unnatural angles, but it seems more like a mistake than anything to me.

The other thing that makes me uneasy about this piece is that the man holding the ship doesn't seem quite centered under it.  The same sort of thing was odd about Steve Austin, the Six Million Dollar Man: he would lift huge boulders from an edge, not from the center of gravity.  Let's ignore for a moment the compression, stress and sheer forces on bone and muscle that would need to be overcome to lift large objects... if you were structurally strong enough to lift them, you would have to do it in such a way that the weight didn't topple you. - F.W.