Every once in a while, I get a note or email from someone inquiring about collecting original Frank R. Paul artwork.  My first, flippant response is: Good luck.

The sad truth is that Paul's are now extremely rare, and quite expensive.

The largest collection I have ever seen go on sale was from the Sam Moskowitz collection at Sotheby's, in June, 1999; the catalog cover is reproduced above. The catalog notes, regrettably, that "Not a single black and white illustration or cover painting from the Amazing Stories period are today known to exist." This, straight out of the premiere auction house's mouth.  Quite a travesty, as this means that Paul's original visions of Edgar Rice Burroughs' Land that Time Forgot, with dinosaurs clambering over a submarine, and H.G. Wells' Martian war machines - are all lost forever.  Moreover the catalog (p. 31) notes, "There are only three [cover] paintings in existence from the year 1929 from Science Wonder Stories and only a handful from the following year 1930." In addition, at least one 1929 Air Wonder Stories original artwork still exists. "After 1929, Paul's paintings became more common, with the majority surviving being examples from the famous back-cover 'themes of life on other worlds' series that was featured for Amazing Stories and Fantastic Adventures.' (p. 61)

The original artwork offered for sale at auction in this catalog (with pre-auction estimates) were:

Lot 670 of Paul illustration from Forecast of electroencephalogram, electrocardiograph, electropsychometer, polygraph and totalizer, $1,000 - 2,000

Lot 672 of Paul illustration of satellite and space construction, from Forecast, $700 - 900

The original painting for Paul's illo for Fantastic Adventures back cover Feb. 1940 (Life on Pluto) 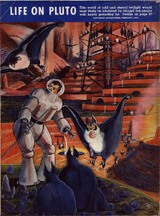 Other Pauls known to still be extant:

The May 1933 Wonder Stories cover painting is still around, though it has acquired some mold damage.  The owner is interested in selling, so please email me if you're interested in buying.

The Nov. 1942 Fantastic Adventures back cover painting sold on eBay for $5,250.  It was sold by Heritage Gallery and Auctioneers.  Here is their description:

Prometheus, Fantastic Adventures November, 1942 (Ziff-Davis). Number five in a 13-painting series titled Greek Gods & Heroes. These early-1940s back cover paintings are considered to be some of Paul's very best work. Ziff-Davis Publications had a strict policy of no nudity on their covers, yet Paul managed to feature a number of nude women in this painting. As best as can be determined, this is the only surviving painting from the "Greek Gods" series.
Mixed media on board, approximately 18 x 13.5. Signed lower left.

In addition, Forrest J. Ackerman had a number of original Pauls.  Unfortunately, it appears that he had to sell most of these to pay for his litigation over ownership of Famous Monsters.  When I was at his Ackermansion in early 2001, he still had a few Paul interiors.  He did have a number of reproductions of Paul's work re-painted by Anton Brzezinski.

AS FAR AS COLLECTING PULP MAGAZINES WITH PAUL's ARTWORK...

This isn't so bad... for most things.  Old issues of Amazing and Air/Science Wonder should set you back ten to twenty-bucks each.  Occasional issues in particularly good quality might go for fifty to seventy-five.  The exceptions are the first issue of Amazing and the "Buck Rogers" issue, Amazing, Aug. 1928, which I have seen go on eBay for $300-$400 and $800-1000, respectively, depending on the quality.  The other rarity is the only issue of Amazing Stories annual, from 1927.  This annual has been dubbed (I don't know how accurately) as the "rarest of all pulps" and I saw one really nice copy sell on eBay for $2,500 (wow!).

Most of the other magazines will go in the more reasonable ten to thirty or forty dollar range.  Exceptions include Comet Stories, which is really hard to find.  Gernsback's Forecast magazines also seem to be very rare, but there doesn't seem to be much interest, either, to drive up the prices.  Superworld Comics in any condition are also extremely rare, with the first issue typically going for $300 - $400, and the other two $100 - $150.  I also only occasionally see Electrical Experimenter available anywhere (hence info on Paul interiors in that magazine on this site is scant). If you see any of these come up on eBay or elsewhere, snatch them up if you can afford it, because you probably won't see it again for a long time.

Undoubtedly the most precious publication with Paul's cover artwork is Marvel Comics, issue no. 1, from Nov. 1939.  The Moskowitz auction catalog noted that "Overstreet states that less than 50 copies of this book are known to exist and only a handful exist in higher grades" and set a pre-auction estimate of $20,000 - 30,000.  Good luck getting THAT one.

Some dealers selling pulps that I have bought stuff from are:

Also try Bill Slater, based in Grants Pass, Oregon, at 472-9015; he does a lot of the west coast sci-fi cons (I just saw him at WesterCon '01), and he has piles of old pulp magazines for sale that are (surprise surprise) really well-organized.