The inspiration and tiny seed kernel for this bibliography was a brief list from isfdb.com (which was not illustrated).  That list has been expanded (probably ten-fold) by my own research and never-ending quest for Paul images; with more than a little help from various FOPs (Friends of Paul) for corrections, additions and jpg's.  Thank you all.  The lists of front covers are now fairly complete and stand at 220+, not counting the reprints in the 1960's.  A few gaps in the data probably remain about covers for the Science and Mechanics and other early Gernsback publications; some Forecast covers also remain elusive and undefined.  A invaluable resource for information about front covers was Michael Ashley's three-volume The History of the Science Fiction Magazine, 1974-5, Henry Regnery Co., Chicago.

The list of Frank R. Paul's back covers is probably complete now (stands at 60+).  I also now have over 605 interior pieces of Paul's artwork listed in Part IV of this list; but note that this number reflects the number of stories illustrated, not the number of illos, as many stories had more than one.  A major source for information on interior art was Everett Bleiler's book on Science-Fiction: The Gernsback Years (which was also a good source on cover art).  (Bleiler catalogued every story that appeared in the major pulp magazines from from 1926 to 1936, with editorial remarks like "a very bad story" or "a little amateurish" or "very clumsily handled" or "a succession of plot cliches, without even the grace of an explanation.")

This means that I know of approximately 900 covers, back covers and interior art pieces done by Mr. Paul. Wow.

The ultimate goal is to generate a complete checklist of every piece of cover and interior artwork ever done by Paul; as far as I know, nothing on this scale has ever been attempted before.  The highlighted text indicates links for larger images.  If anyone has additions, corrections, or more images of Paul's other works, please let me know.

Also, all the references listed herein are magazines unless otherwise noted. 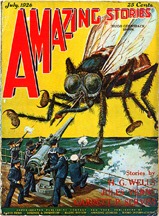 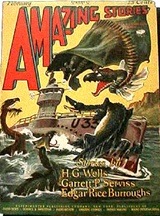 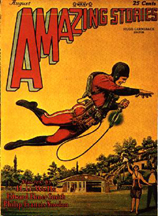 The prize-winning design for a Gernsback contest for a symbol for "scientification," won by A. A. Kaufman of Brooklyn and redrawn by Paul. 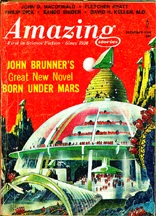 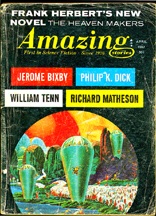 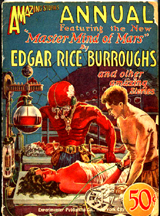 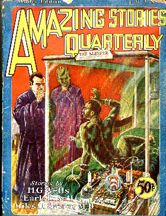 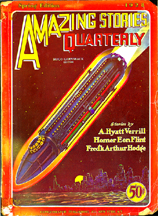 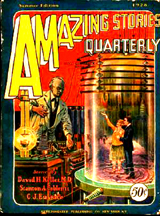 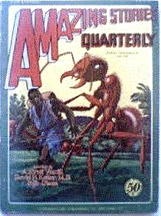 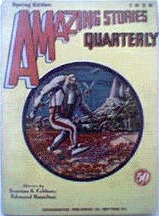 This list is now believed to be complete, though it is possible there may be a couple reproductions from the sixties not yet accounted for.

According to The History of the Science Fiction Magazine, 1974, Vol. 1, ed. Michael Ashley, Henry Regnery Co., Chicago, p. 238, Paul painted 37 total for Amazing Stories, not counting the 1960's issues.  However, I count 38 (perhaps Ashley did not include Sept. '28, wherein Paul redrew someone else's design). Ashley also counts 8 total for for the Annual and Quarterlies, whereas I count 7. The discrepancy may be due to the Summer 1929 issue, which is unsigned, but sometimes incorrectly attributed to Paul.  This issue does not look like Paul's style, and Bleiler suggests that it might have been Hugh Mackay (p. 564).

For an interesting history of the magazine itself, from inception up to Dec., 1936, see pp. 544-550 in Bleiler's book.  It is an interesting story, full of idealism, hucksterism, debt-ducking, and possible criminal acts; the story covers the time when Gernsback lost control of Amazing.  (Did you know that Hugo Gernsback's paycheck was twice that of the then-Governor of New York, Franklin Delano Roosevelt? Yet he refused to pay his creditors.)